If you're looking for a VPN for torrenting, Mullvad has a lot going for it.

Mullvad doesn’t enjoy quite the same hype as some of the other torrent VPNs on the market, but it has quietly built up a strong reputation and following over the past few years.

But is it deserved? And more importantly, is Mullvad a good VPN for torrenting? We’ll let you know in this detailed review.

Is Mullvad Good for Torrenting?

Let’s start off by taking a quick inventory of some of Mullvad’s most relevant features for safe torrenting. We’ll go into more depth on each of them later in the review.

Is Mullvad Safe for Torrenting?

Here are some of the features that make Mullvad a top torrenting VPN.

It’s crucial that you choose a torrenting VPN that doesn’t keep logs. Unfortunately, while pretty much every VPN hävdar they don’t keep logs, ​they don’t always hold up to scrutiny.

That’s why it’s great to see services like Mullvad use third-party audits to ​verify their ​lack of logging. Of course, even before the audit, Mullvad’s logging policy was one of the most transparent around, giving plenty of detail on what exactly they do and don’t log. 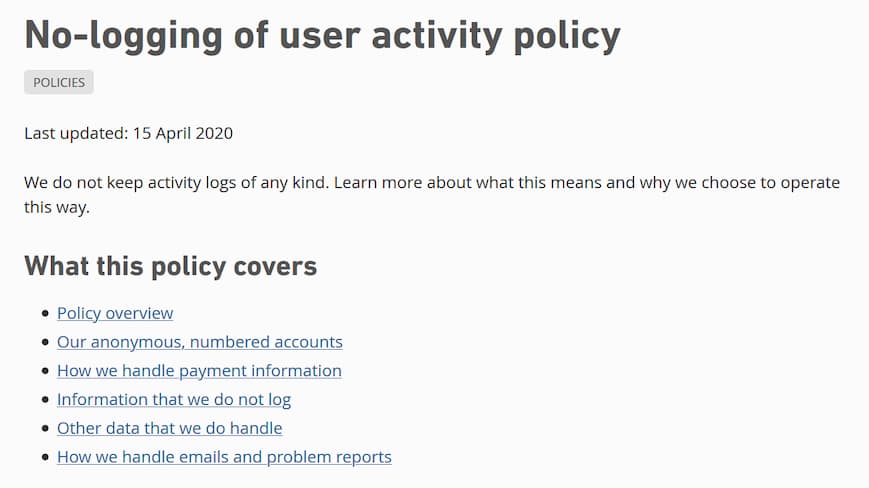 When signing up with Mullvad, you don’t have to provide any personal info, not even an email address. Because of the way their account numbers work, you can also generate a new one each time you subscribe, further covering your tracks.

Of course, unless you pay with Bitcoin or cash, both of which are options, your account will still be tied to your PayPal account or credit card number, but Mullvad’s system is still a lot better than most VPNs.

Not all VPNs appreciate their services being used for P2P torrent file-sharing. It takes up a whole lot of data for one thing, not to mention some of the more controversial aspects.

Fortunately, Mullvad is fine with torrenting traffic, and they even offer a handy styra on how to make your torrenting even more secure.

A VPN primarily keeps your data safe through encryption. And this is especially important when torrenting, since it stops your ISP and other nosy third parties from seeing what you’re downloading.

So, you’ll be happy to know that Mullvad offers military-grade, AES 256-bit encryption, which is the best you can get.

OpenVPN has long been considered the top choice for security among VPN protocols. But many argue that Wireguard has the potential to be better, if it isn’t already. Fortunately, you don’t have to choose, since Mullvad offers both OpenVPN and Wireguard.

Both port forwarding and port selection are rather advanced features, but they can be very useful for a variety of reasons, whether it’s seeding torrents or avoiding traffic throttling/restrictions. Not all torrenting VPNs offer these features, but Mullvad is one of them.

Privacy nerds like us love open source software, because by opening up their code to scrutiny, developers prove that they have nothing to hide – like malicious code or hidden back doors.

As of now, Mullvad is one of only a handful of major VPNs to open source their apps. You can find the code for all of them on their Github.

You don’t want a VPN that leaks DNS or IP data, especially when you’re torrenting. That’s why it’s always a good idea to pick one that offers built-in leak protection features, like Mullvad does.

Bitcoin betalningar don’t make you totally anonymous, but they do make it a lot harder to connect you to an online transaction. So, it’s always a good sign when a VPN accepts them. Mullvad takes it a step further, giving users the option to mail kontantbetalningar​ for even further anonymity.

Between this and their sign-up process, Mullvad has the potential to be almost totally anonymous, if you so choose. That’s not something most VPNs can say.

Mullvad is one of the most secure torrenting VPNs you can get, with all of the features you need to stay safe. Our only concern would be its location in Sweden, which is part of the “Fourteen Eyes” surveillance network.

Is Mullvad Fast for Torrenting?

There are so many benefits to using a VPN when torrenting, you’d be galet not to do so. That being said, there is one minor drawback: it often slows your download speeds a bit.

Some VPNs do better with this than others though, so we made sure to give Mullvad a spin.

As you can see, they did pretty well. Unfortunately, our overall speeds weren’t that high even without a VPN (only because of where we happen to be located when writing this post), but the speed loss when connected to Mullvad’s servers were pretty minimal.

That being said, Mullvad’s overall network size (580+ servers in 36 countries) is rather small compared to some of the other top torrenting VPNs we’ve reviewed. However, we’ve never had any problems with server load when using Mullvad, and they do partially make up for it with the quality of their servers.

For starters, they offer lots of Wireguard servers. And we also appreciate that their servers page is transparent about which servers they rent, which they own, and who the providers are for each.

Mullvad has a rather small server network, but they use quality servers that provide good torrenting speeds.

Is Mullvad Easy to Use?

Mullvad proves that a highly secure torrenting VPN doesn’t have to be a pain to deal with. Here are the main reasons it’s so easy to use.

Mullvad not only has one of the most secure sign-up processes of any VPN service, it’s also one of the easiest. Simply generate an account number, enter your card number, and click submit. You’re now a Mullvad subscriber. It’s that simple. 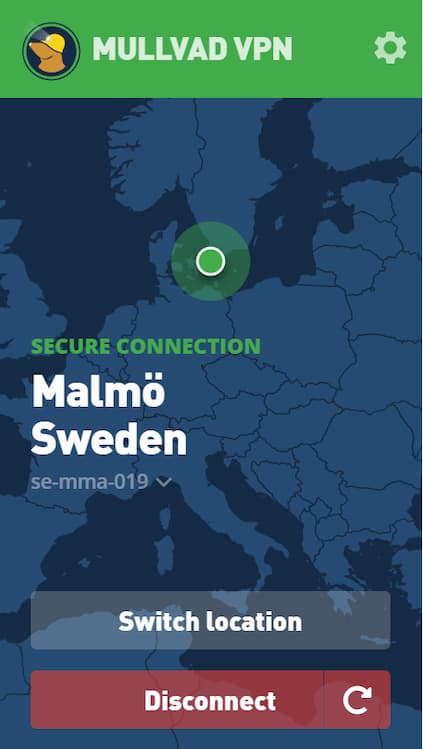 The Mullvad desktop app is fast, lightweight, and unobtrusive. It’s doesn’t have quite as many menus and settings as VPNs like PIA and NordVPN, but what it does it does very well – and it’s never in the way. 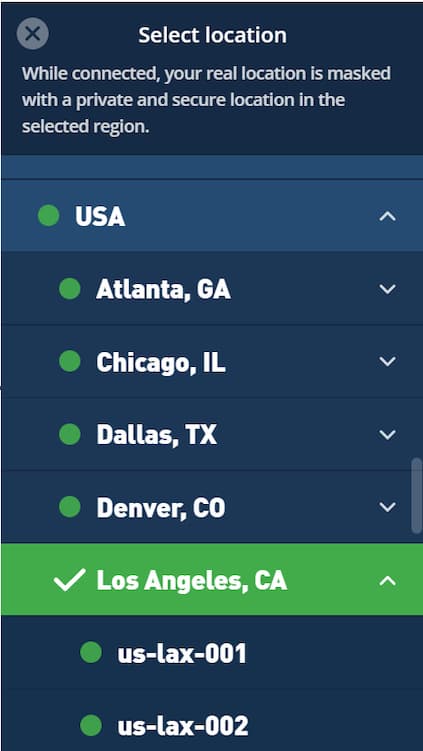 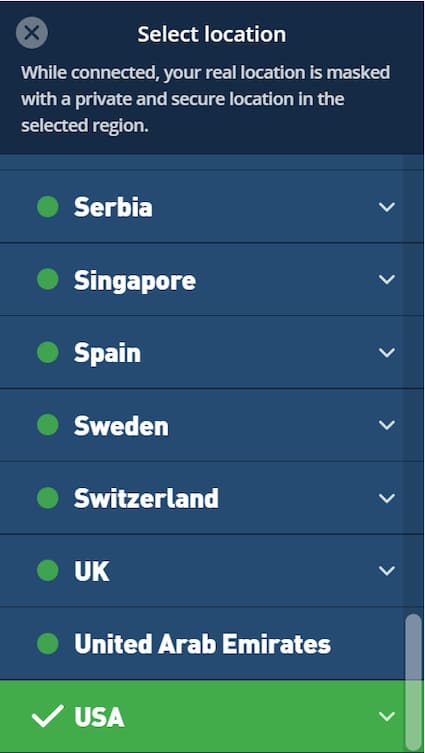 Connecting with Mullvad is as simple as clicking ‘Secure my connection’. But you can also use the list view to choose the country – or even the specific server – you want to connect to. 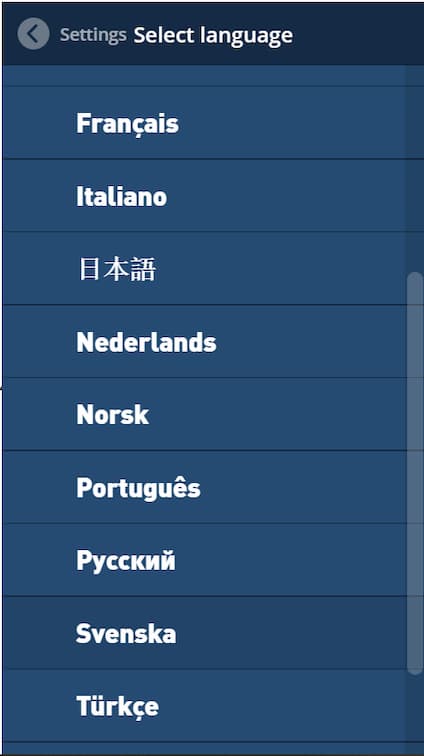 If you’re reading this, you know at least a little English. But it’s not everyone’s strongest language.

And if that’s true for you, then you’ll be happy to find out that Mullvad’s app includes support for a huge number of languages, including German, French, Russian, Mandarin, and, of course, Swedish. They are a Swedish company, after all.

From sign-up to everyday use, Mullvad provides a very streamlined and user-friendly experience. However, it’s not the most beginner-oriented torrenting VPN, and it only offers email support – no live chat.

Mullvad is rather good at torrenting right out of the box, but here are a few extra tips to help improve your experience. 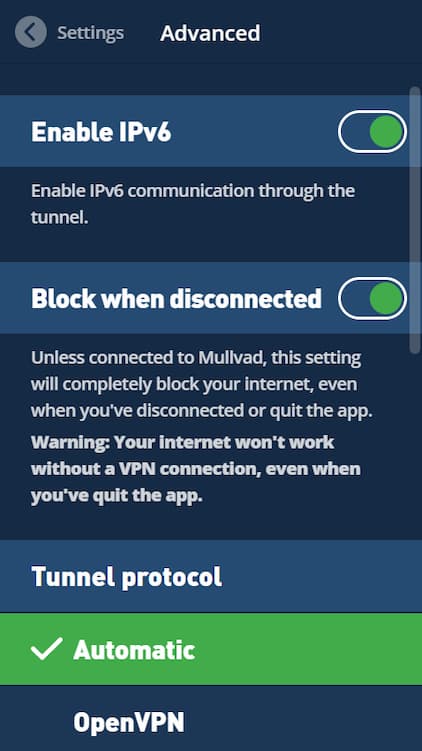 Before you hit your favorite torrent sites and start downloading, make sure to enable the Mullvad app’s kill switch. You can find it under the ‘Advanced’ section of the app’s settings. It’s the switch that says ‘Block when disconnected’.

Just keep in mind that Mullvad’s kill switch will keep you disconnected, even if you close the app, until you turn the kill switch off again.

3. Give Wireguard Servers a Try

Wireguard is the new kid on the block, so to speak, when it comes to VPN protocols. And Mullvad was – and remains – one of the first VPNs to embrace it. As of right now, nearly half of all its servers are Wireguard, but you can find a full list här.

Why use Wireguard? Because its efficient, streamlined code makes it faster and arguably more secure than OpenVPN and other protocols.

There’s a lot to like about Mullvad as a torrenting VPN, from its security features to its lightweight app.

And it’s super easy to use: just select the Wireguard tunnel protocol under the ‘Advanced’ section of the app’s settings. 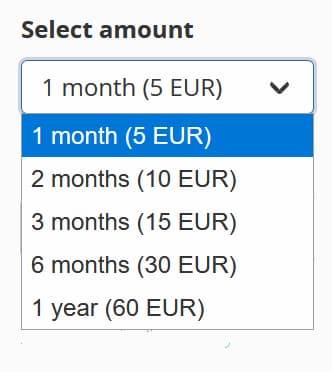 Subscriptions are an affordable flat €5 (or $5.70) per month, regardless of whether you sign up for one month or 50. However, they do offer a 10% discount if you pay with Bitcoin.

Other payment options include credit card, PayPal, and even cash. And all subscriptions are backed by a strong, 30 dagar pengarna tillbaka garanti.

​Mullvad has one of the cheapest and most convenient pricing structures for monthly users. But ​if you're willing to pay for a year or two of service at a time, there are other VPNs that provide better long-term discounts.

Your Mullvad subscription comes with apps for the following:

The last time we looked at Mullvad, they hadn’t yet added dedicated mobile apps, so it’s good to see those additions. Plus, it’s one of the few VPNs with its own Linux client.

VPNs aren’t just for torrenting, you know. Not by a long shot. Here are some other valuable ways to use Mullvad.

While almost all VPNs can help you access content that’s restricted in your country, Mullvad is even better at this because of its support for multi-hop functionality and “stunneling”, along with compatibility with Shadowsocks (a proxy that’s specially designed to bypass China’s “great firewall”) and Tor.

They even have their own onion site.

Whether you’re torrenting, streaming, or just surfing the web, no one wants to deal with bandwidth throttling. Fortunately, a good VPN, like Mullvad, can help you avoid or minimize this type of throttling by disguising your traffic from your ISP.

If you’re in the habit of connecting to strange wi-fi networks, whether while drinking coffee at the neighborhood cafe or waiting for a flight, you really should be using a VPN.

Why? Because hackers love to use these public networks to cause all sorts of trouble, from stealing your data to infiltrating your device. But Mullvad’s strong encryption and other security features will keep you protected.

Not quite sold on Mullvad? Here are some torrenting VPN alternatives worth considering.

Slutsats: Like Mullvad, PIA has Wireguard servers, and PIA’s server network is a lot bigger overall. Plus, PIA is cheaper than Mullvad

What NordVPN does better than Mullvad: Billigare, snabbare, fler servrar

What Mullvad does better than NordVPN: Open source, cash payments

Slutsats: NordVPN is arguably just as secure as Mullvad, though it’s not open source, but it’s also a bit cheaper and has a lot bigger server network.

What ExpressVPN does better than Mullvad: Faster, more servers

Slutsats: Want speed? ExpressVPN is a good bet, and they have lots of servers, but at a higher price. But if you’re more security-oriented – or you’re on a budget – Mullvad gets the nod.

Slutsats: PureVPN is cheap, user friendly, and has a big server network, all of which makes it a solid alternative if you don’t happen to need all of Mullvad’s awesome security features.

What IPVanish does better than Mullvad: Cheaper, more servers

What Mullvad does better than IPVanish: More secure, more trustworthy

Slutsats: IPVanish has a lot more servers than Mullvad, but Mullvad is superior in almost all other areas, including trovärdighet.

So, let’s sum it all up, shall we? With Mullvad, you’re getting a torrenting VPN with:

There’s a lot to like about Mullvad as a torrenting VPN, from its security features to its lightweight app. However, while not expensive, it’s not as cheap as PIA, which also has a bigger server network. Still, with PIA’s recent acquisition by Kape, many torrenting users will feel safer using Mullvad VPN.

Read More About Mullvad for Torrenting »